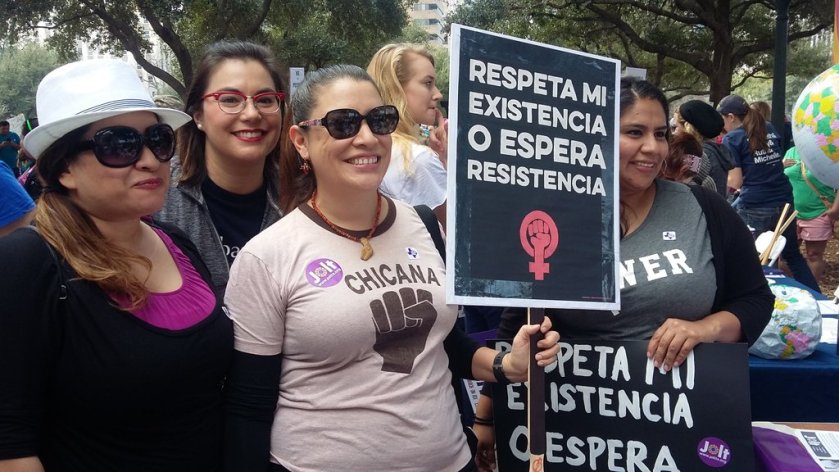 This week, we are gathering here a few of the various voices we heard from women of color on their participation in the Women’s Marches that occurred across U.S. cities and cities across the world.

First, an interview with Angela Peoples, whose photo with her sign “Don’t forget, White women voted for Trump” went viral; it crossed our feeds many times, shared by our friends of color.

“Most were saying, “Not this white woman,” or “No one I know!” I’d say, “[Fifty-three percent] of white women voted for Trump. That means someone you know, someone who is in close community with you, voted for Trump. You need to organize your people.” And some people said, “Oh, I’m so ashamed.” Don’t be ashamed; organize your people. That’s why the photo was such a great moment to capture, because it tells the story of white women in this moment wanting to just show up in a very superficial way and not wanting to do the hard work of making change, of challenging their own privilege. You’re here protesting, but don’t forget: The folks that you live with every single day—and probably some of the women that decided to come to the march—voted for Trump, made the decision to vote against self-interests to maintain their white supremacist way of life.”

Next, a twitter thread written by an Indigenous woman (@sydnerain)that connects her disheartening experiences with white women who were disrespectful at the D.C. March to a larger critique of settler colonialism, stolen land, and indigenous sovereignty. The twitter thread includes responses to her narrative that mirror the disappointing interactions she had at the march, as individual women discount her truth and seem resistant to hearing her. We think the thread speaks to both the possibilities and limitations of trying to have a dialogue online.

One of the important interventions that many of our friends undertook after the marches was to challenge the celebration of the “peaceful” nature of the marches. This article uses powerful images of the state violence faced by Black and Indigenous activists, in particular, to ask what do we mean when we say “non-violence” and “peaceful.”

Finally, we end with Alicia Garza, co-founder of Black Lives Matter, who asks whether anger and cynicism is helpful in terms of the practice work of moving forward politically. She concludes,

“If there was ever a time to activate our organizer super powers, this is it. I’m not going to argue that black people or other people of color need to stop holding white people accountable. White people are not going anywhere, but neither are we if we don’t start to think and do differently.

Hundreds of thousands of people are trying to figure out what it means to join a movement. If we demonstrate that to be a part of a movement, you must believe that people cannot change, that transformation is not possible, that it’s more important to be right than to be connected and interdependent, we will not win…If our movement is not serious about building power, then we are just engaged in a futile exercise of who can be the most radical.”