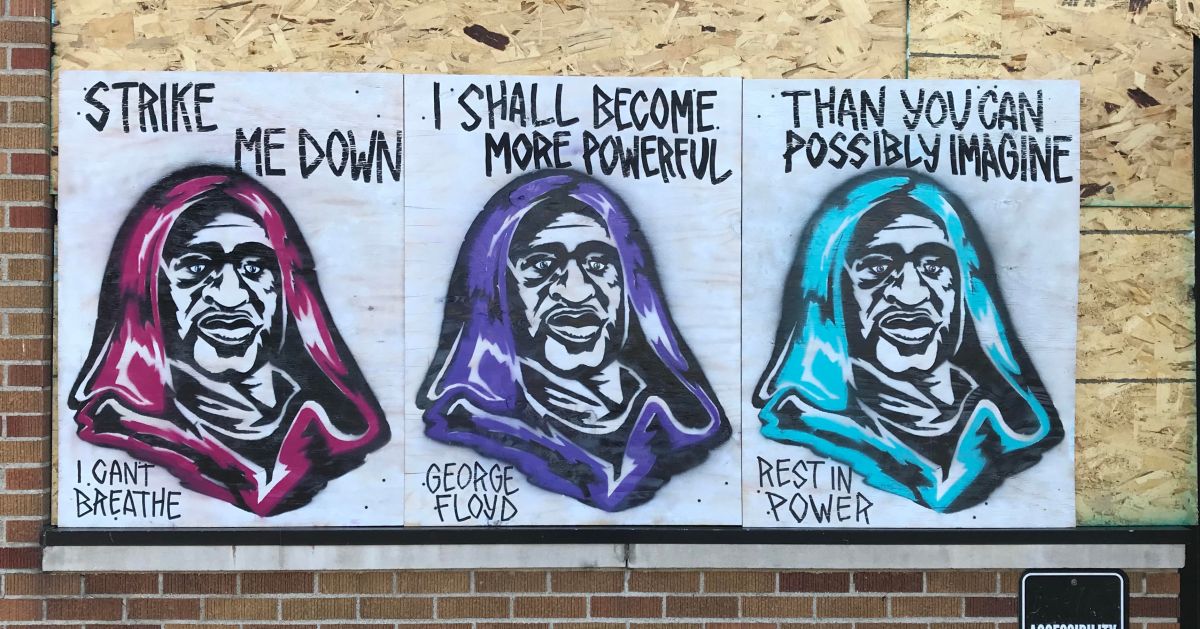 Photo by Anita; on Chicago Avenue between 37th and 38th streets, South Minneapolis.

Note: We will be working on a series of posts centered around “changing our imaginations” about education, colleges, and all the things that the two of us love to think and write about, as inspired by Kandace Montgomery, a Minneapolis-based organizer for Black Visions Collective. This post is by Anita.

They’ve ruined our imagination and told us that policing is the issue [solution]. We need to change our imagination. We have to change what’s possible. Concretely, it’s putting investment in things like making sure everyone has food, making sure everyone has housing…being in process together so how do we want to keep each other safe? How do we want to address harm? Because harm will happen. How do we do that without sending racists with guns who have no accountability? Kandace Montgomery, Black Visions Collective and Reclaim the Block.

Since then, Minneapolis, St. Paul, and cities and towns across the U.S. have erupted in protests against police brutality, calling for an end to racist policing and more importantly, an end to policing. Minneapolis is leading the country in reimagining community safety and community health and resilience beyond police. Thanks to the decades of organizing by Black activists and communities, especially Black youth, the Minneapolis School Board voted to end their contract with the Minneapolis Police Department and nine out of twelve City Council members have pledged to “dismantle the police department.”

During the first week of the uprisings in Minneapolis, I had a conversation with a friend that got me thinking about all the ways in which we need to divest and reinvest as we collectively imagine and build futures of justice for Black communities and for all of us. There’s the concrete divestment of money and resources from harmful institutions and the reinvestment of money and resources into community-led, justice-oriented solutions. What is also necessary is the divestment of my own thinking and ideas about safety and order. Or as Kandace Montgomery put it in an interview with Unicorn Riot after the community meeting on June 7, 2020, where the nine city council members announced their pledge to dismantle the police department, “We need to change our imaginations.”

During a phone call with a friend the day after the 3rd precinct and many nearby buildings had burned down, we talked about how my first reactions watching buildings in South Minneapolis burn down were shock and horror. I talked about how I was raised to believe in the politics of respectability, to obey laws, to follow the rules, and to believe that the police were there to help us. I needed to be honest in naming that my first reactions might have been shock and horror, rather than pretending like I didn’t have those initial reactions. I needed to acknowledge that I needed a moment to reframe what was happening. That I had to understand what we were seeing through a different lens than the ones given to me as a child of South Asian immigrants to this country. That I needed to shift my focus to the kindling from the flame, as historian Carol Anderson described it. That I perhaps needed to learn more about what it means to abolish the police if I am to truly divest from what I have been taught to believe.

To that end, a partial list of resources that I’ve found useful if perhaps you too need to divest from some of your previous ideas about what keeps us safe:

MPD150’s frequently asked questions page that answers questions such as “Won’t abolishing the police create chaos and crime? How will we stay safe?”

The first eight steps of abolition–what do we divest from, what do we invest in.

How to talk to children about the idea of abolition: a Woke Kindergarten reading of Wings by Christopher Myers

The end of policing Alex Vitale

Throughline podcast episode about the origins of American police

P.S.: Yeah, we’ve been on hiatus for a while…but we’re back at least for now. Given everything happening in our world today, we won’t promise that we’ll be blogging regularly or all the time, but we’ll try our best to put out posts on somewhat of a regular basis. As always, if you have a question about a race-related topic, particularly one pertaining to how we can imagine different, more just, more anti-racist ways of living, working, learning, and teaching on a college campus, you can write to us here.

P.P.S.: We’d love to have folks do guest blog posts for us around the theme of “changing our imaginations,” especially in the realm of education/higher educational institutions. So BIPOC folks interested in doing so, hit us up!